Holiday On The Buses (movie)

Edit
watch 01:25
Jurassic World: Dominion Dominates Fandom Wikis - The Loop
Do you like this video?
Play Sound
Holiday On The Buses 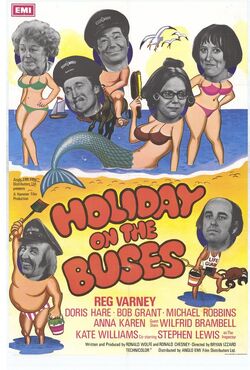 Holiday on the Buses is a 1973 British comedy film directed by Bryan Izzard and starring Reg Varney and Doris Hare. The film is the third spin-off film from the ITV sitcom On the Buses and succeeded On The Buses (1971), and Mutiny on the buses (1972). The film was produced by Ronald Chesney and Ronald Wolfe for Hammer Films.

Following an accident at the bus depot which results in the destruction of the depot manager's car, the bus Stan was driving and Inspector Blake suffering a broken foot, Stan and Jack find themselves unemployed. However, they soon find jobs as driver and clippy on the bus belonging to a holiday camp in North Wales. On their first day they discover that Blakey, who was also fired by the bus company, as the resort's security inspector. Inspite of this Stan invites his family to stay, which they accept. Arthur, however, refuses to pay the railway fare so takes the family, including his son, Little Arthur on his motorbike. As the family are approaching their destination Stan, driving his bus filled with holidaymakers recently arrived at the railway station, sounds his horn, which causes Arthur to send his motorbike over a bridge and into a river, all of the family's luggage is ruined.

Meanwhile, Blakey is trying to teach to teach the campers old time dancing while also falling in love with the camp's nurse. Stan, who has been trying to woo a holidaymaker named Mavis, but is thwarted everytime by her overprotective mother. One evening Stan and Mavis manage to spend time with eachother in the family chalet, with the family going out to the camp nightclub and Little Arthur being babysat by Stan. With Stan's attention being all on Mavis, Little Arthur fills his watergun with ink and sprays the whole bedroom. Exasperated, Stan is forced to redecorate the chalet from the camp's stores before Blakey or camp management find out. To apologise to his family, Stan takes his family on a cruise, organised by the camp. Thinking that because her mother hasn't gone on the cruise because she gets seasick, Stan gets a room on the boat for him and Mavis. Unfortunately, Stan himself gets ill and Jack steals his love.

With Mavis now returned home, Stan now attempts to impress an Italian employee of the park, Maria. While Maria is babysitting the camp manager's baby she and Stan hope to spend the evening together, but the manager and his wife return home early. This next morning at staff breakfast, Inspector Blake overhears Stan and Jack talking and jumps to conclusions about Stan 's behaviour the previous night. He tells Maria's brother, Luigi, the camp chef. After Luigi confronts Stan and the manager diffuses the situation by telling Luigi that Stan couldn"t have been with Maria in the manager's house as he waa only gone a few minutes.

Jack has been starting a romance with the nurse, with the inspector blissfully unaware, until he sees part of the bus crew's uniform hung up outside the nurse's office and he hears moans of pleasure from behind the door. The inspector believes it is Stan who is seeing his love and he chases him through the park. The camp manager sees the chase and fires Blakey, as he also has also has the nurse's bra on him, saying that he is a sick man.

As the Butler family returns home, Olive points out the spot that Arthur crashed into on the first journey, causing him to have a second crash, losing their luggage again. Meanwhile Stan and Jack use the bus to drive two young women out to the beach, only to drive the bus into wet sand. They say that they will return in the morning, but the bus is now submerged by the tide. Left unemployed again Stan and Jack are horrified to discover that Blakey is now employed at the Labour Exchange, and tells Stan he has the perfect job for him. The film finishes showing Stan enjoying his new job as a wrecking ball driver for a demolition company.