Mutiny On The Buses (movie)

Edit
watch 01:25
Jurassic World: Dominion Dominates Fandom Wikis - The Loop
Do you like this video?
Play Sound
Mutiny On The Buses 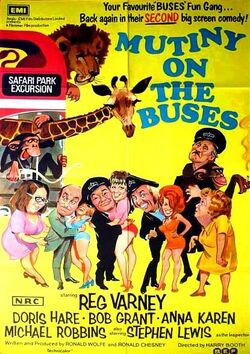 Mutiny On The Buses is a 1972 British comedy film directed by Harry Booth and starring Reg Varney and Doris Hare. The film is the second spin-off film from the TV sitcom On the Buses and succeeded On The Buses (1971). It was followed by a third film Holiday On The Buses (1973). The film was produced by Ronald Chesney and Ronald Wolfe for Hammer Films.

Bus driver Stan Butler (Reg Varney) agrees to marry Susy (Janet Mahoney), much to the anguish of the rest of the family. Arthur loses his job so Stan, as the main money earner, agrees to delay the wedding while teaching Arthur to drive a bus.

Meanwhile there is mutiny at the depot when the Depot Manager installs a new radio control system in all the buses (borrowing an idea previously used in the episode "Radio Control"). Jack (Bob Grant) tampers with the radio system and crosses the wires with the police frequency and several misunderstandings ensue. Stan and Jack get into various scrapes, including a fire drill and a special tours trip to Windsor Safari Park, all to the exasperation of Inspector Blake (Stephen Lewis).

Stan Butler is so enamoured by new clippie, Susy that he agrees to marry her. While his friend and colleague, Jack welcomes the news, his family do not, especially when Stan's brother-in-law, Arthur loses his job. To make Stan's situation worse, the bus depot gets a new general manager, Mr Jenkins, who wants to make the company profitable and for its employees to work harder.

Mr Jenkins' first new rule is to stop bus crews from wearing scruffy looking clothes under their company uniform. Jack, as shop steward, and Stan start a mutiny, saying that employees will only wear company issued clothing in work, which leads to embarrassment for Jenkins, who blames Blakey for not controlling the crews.

Soon after, Stan discovers that the company will be hiring new staff. Stan decides that Arthur should apply to be a bus driver, and to help him pass the test he lets Arthur drive his bus while he is out on his routes. This plan is in jeopardy when Mr Jenkins installs radios in all buses, so Inspector Blake can keep track of buses. Jack however, interferes with the radio, leading to several misunderstandings, which results in the police ordering the radios removed from the buses.

Management, then issue Blakey with a van so he can drive around making sure that the buses are in the right place at the right time. An accidental fire at the bus depot, caused by Stan and Jack, which exposes the depot's woefully inadequate firefighting equipment, destroys the inspector's van. Mr Jenkins orders that Inspector Blake holds a fire drill after purchasing new firefighting tools. Unfortunately Stan and Jack destroy the new foam machine and flood the bus depot. Meanwhile, Arthur has now become a bus driver, and tells Olive that he will be late home because of the fire drill, she however, doesn't believe him and rides his motorbike to the depot but crashes it into the maintenance hole.

  Despite Stan no longer being the main breadwinner in the house, he discovers that he can't afford the deposit for the flat with Susy. Mr Jenkins tells all of the crews that he is planning to arrange a regular trip to Windsor Safari Park, and whoever is selected to be the driver will earn a higher wage, Stan gets told by Blakey however, that since both he and Jenkins blame Stan for the fire drill accident he won't get the new job. That evening at the company's darts competition, Olive is taken home early, after she starts a fight with Norah, Arthur's clippie, whom she accuses of flirting with eachother. A few days later Stan and Jack find that Norah and Mr Jenkins are having an affair, so Stan blackmail him in order to get the safari job.

  A few days later, on a trial run to the safari park, an accident to the bus' emergency exit gives a lion the chance to get on the vehicle, when they have stopped because of other lions blocking the way. The debacle means that the company loses its contract for the safari park. Mr Jenkins' wife has discovered his affair with Norah and had him transfered to another depot. Stan invites Susy around to the family home for dinner to discuss things, and after Olive announces she is pregnant, meaning even more pressure on household bills, she concludes that she will never beable to get married and gives Stan the engagement ring back.

  After he finds out that Blakey has been demoted for his part in the mess at the safari park and that Jack will no longer be his clippie, Stan is delighted that the company has hired three new clippies, including Gloria, who will be on his bus. The film ends with Stan and Gloria in top of the bus kissing, with Stan promising Gloria he will marry her, just like he does with Susy at the start of the film.