On The Buses (movie)

Edit
On The Buses 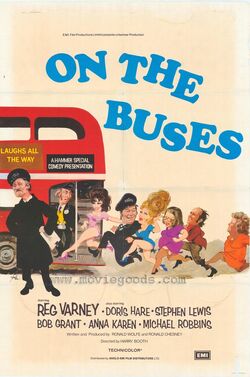 On The Buses Film is a British comedy film directed by Harry Booth and starring Reg Varney and Doris Hare.

Bus driver Stan (Reg Varney) cannot afford the repayments on a new washing machine. His overtime earnings have been cut because the bus company have decided to revoke a long standing rule and employ women bus drivers. Worried at the thought of no overtime, and therefore less wages, he joins forces with his long time work colleague Jack (Bob Grant) to sabotage the new female employees. Meanwhile his sister Olive (Anna Karen) works in the canteen and is about to have a baby.

Stan Butler is worried that the overtime he is earning, that his family is using to buy expensive items such as a washing machine, will stop when the bus company rectifies its staff shortage. He concerns are realised when the management scraps a rule which states that women cannot drive buses. The loss of overtime forces Stan to persuade his sister, Olive to work at the bus depot's staff canteen. Soon after however, Olive and her husband Arthur, discover that Olive is pregnant, and so is forced to give up her job after only a short time. With Stan's lower income and Olive no longer working, the Butler family is forced to return their new things. At the same time, Stan gets into trouble after trys to retrieve an item of friend and colleague Jack, from the home of a woman he has been seeing. Unfortunately Stan destroys a telephone booth and bus shelter, while trying to avoid the woman's suspicious husband.Despite his efforts to lie to Inspector Blake about how the damage was caused, Stan is forced to take a bus skid test in order to keep his job.

Stan passes the test, but is worried that the new women employees will force him and Jack to change their layabout ways and stop them from their liasons with women on company time. They conclude that the best way to deal with their problem is to sabotage the buses the women drive to make them look bad. Despite soom initial sucess with small pranks, Stan laces the womens' tea with diurectic, upon seeing the effect is has on Olive now she is pregnant. This results in the women making regular toilet stops while out on their routes. Later, upon seeing how scared Olive became when she saw a spider, Stan and Jack plant some in the cabs of their buses, causing more interuption to their routes.

As Olive's due date approaches, Arthur asks for Stan's help in making his motorbike's sidecar more comfortable for her. He takes his bike into the bus depot's maintainance garage, and discovers that the company has recently bought some diversion signs, to be used around town when there are roadworks. Stan and Jack decide to order some more for their own use. They, of course use them to reroute the womens' routes, with one diversion taking the bus onto a motorway, causing the driver and Blakey, who happened to be on the bus to get into trouble with the police.

Olive gives birth to a baby boy, but the joy is shortlived when the family struggle to cope with the newborn. Stan and Jack are however, overjoyed when they discover that their guerilla tactics have worked, and the company are no longer employ women drivers. However their joy is short lived when they are told the women have been rehired as inspectors, plus he and Jack are to be immediately seperated and put onto different routes. Stan however, is happy that Jack's replacement is an attractive young woman.